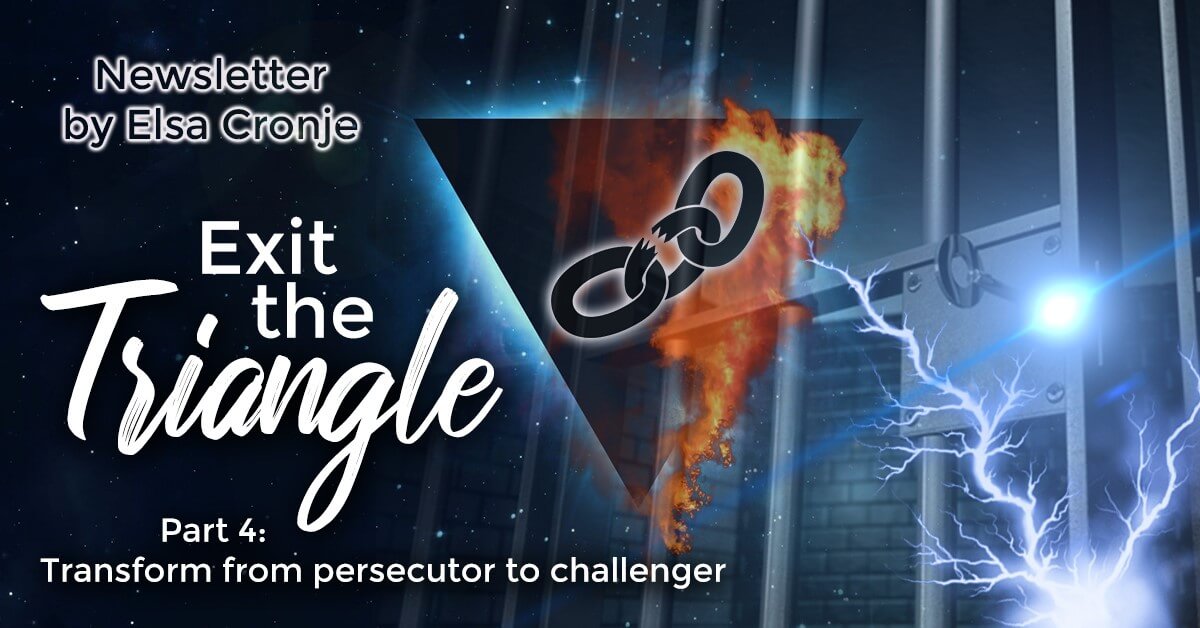 Transform from persecutor to challenger

When I started writing this triangle series, I dreaded the persecutor because it is one of the roles I have been confronted with my whole life. Amazing how our unconscious minds remember trauma and when we are confronted with “similar” circumstances, the mind wants to react the same way it did. I praise our Father that this is resolved and He is to thank!

Throughout this series, I realise how far the Holy Spirit has brought me in regards to exiting the triangle, implementing boundaries, taking responsibility and being myself so others can exit the triangle and grow.

Welcome to the Exit the Triangle Series by Elsa Cronje of Take a Leap Coaching.
This is the last part of the triangle series and we will end it with the persecutor.

Those of you who read the rescuer part of the series (read here) will remember the metaphor of the dog on the nail. Using the same example, a persecutor will usually do the following to the dog:
• Yell at it for sitting on the nail
• Force it off the nail
• Starve it
• Ignore it

All of the above will just victimize the dog further — not helping to heal and grow. Yes, there will be times when we are asked to kick the dog of the nail, but then we must be ready to accept the consequences and likely lose that person.

The persecutor can also be the dog on the nail — blaming everyone else through persecuting them for being in this position. The root cause or driver for the persecutor is “I need to protect myself and prove myself”.

Then the eyes of the two of them were opened [that is, their awareness increased], and they knew that they were naked; and they fastened fig leaves together and made themselves coverings. And they heard the sound of the Lord God walking in the garden in the cool [afternoon breeze] of the day, so the man and his wife hid and kept themselves hidden from the presence of the Lord God among the trees of the garden. But the Lord God called to Adam, and said to him, “Where are you?” He said, “I heard the sound of You [walking] in the garden, and I was afraid because I was naked; so I hid myself.” God said, “Who told you that you were naked? Have you eaten [fruit] from the tree of which I commanded you not to eat?” And the man said, “The woman whom You gave to be with me—she gave me [fruit] from the tree, and I ate it.” (Genesis 3:7-12)

After Adam felt shame when he realized that he was naked, he perceived Abba Father as a persecutor and hid from Him — turning himself into a victim. How sad is this, that we can so often misinterpret Him to be a persecutor when Jesus was FULLY persecuted so we can be His children.

When Abba Father asked Adam whether he ate from the tree which God has commanded him not to eat from, he blamed Eve. He moved from being a victim to a persecutor himself and refused to take responsibility for his choices. Goodness, how often have you seen this in your day to day life? People blame others left, right and center for their behaviour, emotions, reactions, circumstances, beliefs, etc. What is lurking behind the blame? Yup, you’ve got it … the triangle!

If we love South Africa, then each one of us will ACTIVELY start to exit the triangle and stimulate others to do the same.

And if your fellow believer sins against you, you must go to that one privately and attempt to resolve the matter. If he responds, your relationship is restored. But if his heart is closed to you, then go to him again, taking one or two others with you. You’ll be fulfilling what the Scripture teaches when it says, ‘Every word may be verified by the testimony of two or three witnesses.’ And if he refuses to listen, then share the issue with the entire church in hopes of restoration. If he still refuses to respond, disregarding the fellowship of his church family, you must disregard him as though he were an outsider, on the same level as an unrepentant sinner. (Matthew 18:15-17)

Shame has a huge effect on people, whether we want to admit it or not. How does shame often get a hold on people these days? Religion. Why? Because religion portrays that we can do something to prove ourselves to God or make Him love us more. This defies what Yeshua came to fulfill.

Looking at Matthew 18:15-17, I know of so many times this verse is used to shame others. A very important factor in regards to this specific part in the Bible is that we need to be sure that the “sin” against us is not a reflection or perception, BEFORE confronting the other party. What do I mean when I say this? Sometimes things happen and we perceive things as true when it is our own beliefs turning into self-fulfilling prophecies.

Two months ago, a friend of mine asked me why am I so afraid of disappointment. When she said it, I COMPLETELY realised that I feared my husband will disappoint me and this became my reality. When we fear something, it is because we actually believe it will become true. My husband ended up disappointing me MOST OF THE TIME. Man, the power of our beliefs! As soon as I realised this, I was able to remove it and my husband has not disappointed me since then.

The type of confrontation in Matthew 18, in my opinion, is often accompanied with pride leading to blaming and shaming the other party involved. I do believe that the intention of Matthew 18:15-17 is to practice good stewardship in our relationships, but this can ONLY be done when we are self-aware, understanding why we react to things in certain ways and deal with our beliefs. Unprocessed trauma and false beliefs are like a slayer, hiding the truth about our emotions to us.

The persecutor’s entry point causes people to attack others by pursuing an apology or approval to confirm they are right.

What are the consequences of the persecutor entry point?
• Always right; others are wrong
• Deny or abusive in order to defend themselves
• Zero tolerance for emotions or compassion
• Refuse to ask for help and see processing trauma as unnecessary
• Distant and overactive boundaries
• Blaming others and not taking responsibility
• Struggle to apologise
• Living the life of a victim
• Easily feels victimised; thus, easily feels persecuted themselves

How can you help a persecutor transform into a challenger?

How can a persecutor transform into a challenger?

• Heal and process trauma
• Overcome shame (Click here)
• Stop blaming and take responsibility for your life
• Allow Abba Father to protect you
• Let go of strive and proving yourself – Jesus already did!
• Be in the moment
• State boundaries clearly
• Listen without taking offence

I hope you have been blessed with this triangle series and that it made a positive contribution to your journey with Abba Father. The triangle has become a way of living in South Africa and it is up to us to break this pattern and transform to the new creations that we actually are! I encourage you to exit the triangle starting today!

This series very lightly touched on shame, which “Defeat that Feeling” focuses on overcoming. My prayer is that you will be sensitive to the prompting of the Holy Spirit to know when you need to let go of what and whether you need help with it. Getting help is not a weakness, if it were, we have to call Lazarus weak after Jesus asked his siblings to remove the burial cloths off of him when he was resurrected.

I call heaven and earth as witnesses against you today, that I have set before you life and death, the blessing and the curse; therefore, you shall choose life in order that you may live, you and your descendants, by loving the Lord your God, by obeying His voice, and by holding closely to Him; for He is your life [your good life, your abundant life, your fulfillment] and the length of your days, that you may live in the land which the Lord promised (swore) to give to your fathers, to Abraham, Isaac, and Jacob. (Deuteronomy 30:19-20)