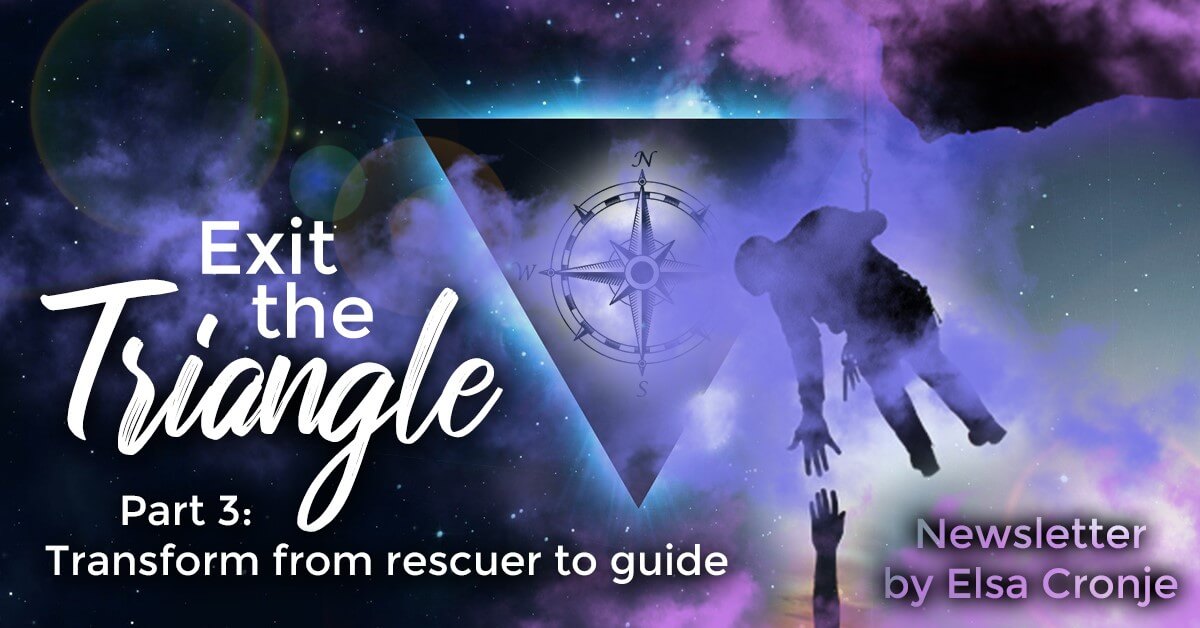 Transform from rescuer to guide

Let’s be honest, everyone experienced trauma in their lives. Every single person responds to trauma differently. It is also impossible to label trauma because it will be different for each individual. You might experience something as traumatic when I do not, and vice versa.

For me, the most natural thing to do is rescue. Not only was it my entry point from trauma, but it is also part of my personality. It took me 8 years to realize this and transform into being a guide. Though my natural instinct is to rescue, I have to consciously CHOOSE to guide every time.

Yes, this is a process and it’s a new muscle I started to use which will become stronger and stronger as time goes by. Thus, be patient with yourself as you discover new things you need to let go of.

You might not be sure if you are a rescuer or not, so here are a few “fruits” of being a rescuer:

• Easily feeling used, betrayed or nothing you do is ever enough
• Highly emotional and sensitive
• Internalize emotions – blaming oneself for others’ pain
• Zero boundaries – making every problem your problem
• Over-responsible for wanting to be everything for everyone
• Control or calculate to prevent
• Treat yourself the way you were treated as a child
• Turning into a martyr; feeling you have to sacrifice yourself so others can be happy

Remember, I can only share this because I used to be a full-on rescuer. Frankly speaking, it was part of my survival technique to keep me moving forward. I’m not sure what would have happened to me without it. It was a program running that was part of my journey and it was also used by Abba Father for His glory and everyone’s good. There came a time, though, when it was outdated and then the program had to be uninstalled.

Why am I sharing this? I do not want you to judge yourself if you are an unconscious rescuer, because the Holy Spirit will reveal to you when it’s time to transform into the guide and leave the pattern.

Welcome to the Exit The Triangle series by Elsa Cronje from Take a Leap Coaching. This is Part 3 — focusing on the rescuer.

What is the unconscious driver behind the rescuer?

• I ought to save others
• Because I can see others’ pain, I should help them
• I have to protect others; especially those who cannot protect themselves
• It is my responsibility to make others feel happy
• Being the hero is my purpose
• When I do good, I am accepted and that is what is expected

Let’s look at the definition of rescue:
save (someone) from a dangerous or difficult situation. (Oxford dictionary on Google)

Let giving flow from your heart, not from a sense of religious duty. Let it spring up freely from the joy of giving—all because God loves hilarious generosity! (2 Corinthians 9:7)

So yes, there is a time when we can be called by Abba Father to rescue someone, BUT then it is OUR own responsibility to not enter the triangle. Why do I say this? If you rescue someone and enter the victim triangle while they are the victim, you can easily become the victim when they are not saved the way they wanted to be saved and blame you. It is therefore important to leave the consequences of YOUR OBEDIENCE to Abba Father.
In my case, up until now I haven’t received the call to save someone — only to guide them out of “victimism”.

What happens if we rescue?

Pete asks uncle John: “What is the matter with your dog?”

Pete: “Why doesn’t it get up from the nail?”

When we rescue someone, it’s like walking up to the dog and petting it, feeding it and sitting with it — keeping it company. This sends the message to the dog that it doesn’t have to change, ask questions nor get up because God will ALWAYS send people to help or save him. This enables the dog to stay on the nail and stay a victim.

Another symbol is that rescuing means you give someone a fish instead of teaching them HOW to fish. Just giving them a fish creates a co-dependency turning YOU unconsciously into God for that person.

What is guiding then?

Putting the food 10 m away from the dog, calling and motivating the dog from a distance once in a while, so it will get up from the nail by itself and start to ask relevant questions to why it is on the nail in the first place.

What needs to change in a rescuer to transform into a guide?

• Remove the false belief that one is valuable because one saves others — this takes Yeshua’s place; He already saved EVERYONE that chooses to believe and follow Him
• Allow the victim to CHOOSE — not allowing anyone to choose is manipulation and turning them into a puppet
• Allow others to sow the seeds they choose to sow
• Stop taking responsibility for others’ happiness, well-being, etc. — will you want others to take responsibility for your happiness and wellbeing? Definitely not
• Empathize instead of sympathizing
• Encourage instead of disabling

If you find yourself in a situation where you feel the need to “save” someone, ask yourself the following: “If I help them, will I teach them to fish or give them a fish?”

This miracle done by Jesus is one example of guiding:

Now there was a man who had been disabled for thirty-eight years lying among the multitude of the sick. When Jesus saw him lying there, he knew that the man had been crippled for a long time. So Jesus said to him, “Do you truly long to be healed?” The sick man answered him, “Sir, there’s no way I can get healed, for I have no one who will lower me into the water when the angel comes. As soon as I try to crawl to the edge of the pool, someone else jumps in ahead of me.” Then Jesus said to him, “Stand up! Pick up your sleeping mat and you will walk!” Immediately he stood up—he was healed! So he rolled up his mat and walked again! Now, this miracle took place on the Jewish Sabbath. (John 5:5-9)

First of all, Jesus NEVER assumed he wanted to be healed, he asked him first; meaning JESUS gave him a choice and allowed him to choose. Secondly, how profound that Jesus gave the man a specific action to complete. He did not help the man to his feet, nor did he sympathise with him. In verse 14 Jesus says the following to him: “Look at you now! You’re healed! Walk away from your sin so that nothing worse will happen to you.”

Such encouragement and enabling the person to choose his own responsibility. I just love it! I pray that when the Holy Spirit reveals to you that you are a rescuer, you will transform into the guide, in Jesus Name, AMEN!